This is a preview lesson. Please purchase the course before starting the lesson.

Today we start working on the fantastic Starman by David Bowie. There are three TAB loops to practice with, starting with the intro.

The intro uses a Bbadd#11 chord which straight away tells us what song it is.

Using a unique chord like this as an intro is very clever, there really is no doubt that it is Starman we are listening to straight away.

When you can play along with the TAB loop, move on to the first verse example.

The first chord, a Gm in the open position is not like the original, I used it in order to show that this chord is actually possible. 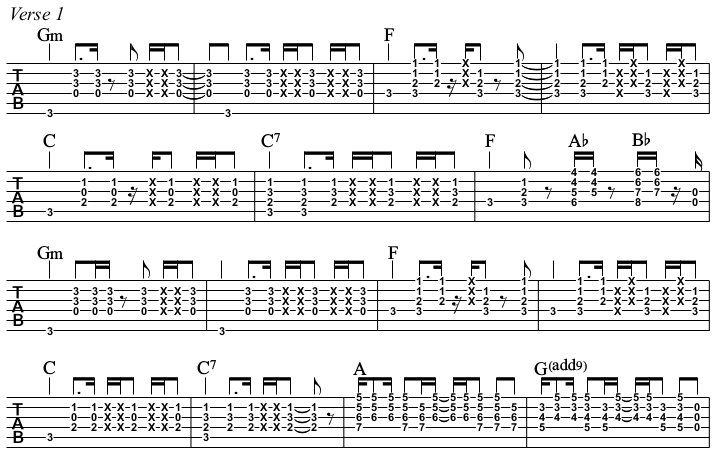 The first half of this verse finishes off with chord I (F) and a quick bIIIx (Ab) and chord IV (Bb).

As we play the verse progression again, it is now 8 bars, rather than 7. We finish with A (chord IIIx) and Gadd9 (chord Iix).

The rhythm for all this is constantly modified in the first of two bars, look to the video lesson above for an in-depth explanation.

Play along with the loop, aiming to play the exact same way. When you eventually play it on your own, you don’t have to use the exact rhythm the TAB show, you can be more free, remember, my version was improvised. So should yours be.

Let’s move on and look at verse 2. It is very similar, although there are some small modifications here and there. 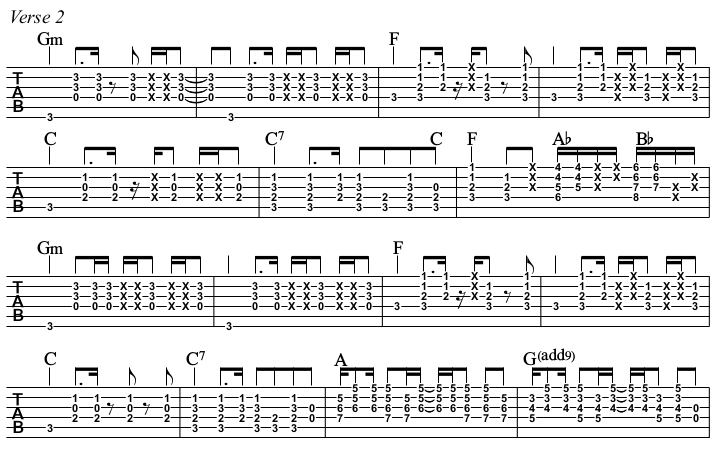 Play along with the loop, aiming to get it exactly as my improvised part.

Do this and it will be easier to let go of it and play your own rhythmical variations.

Next time, we move on down the arrangement and find the chorus.