Marshall Amps, built by a drummer!

Jim Marshall started out in the early 60s selling drums and giving drum lessons in his own shop in Hanwell, west London.

As well as having Keith Moon as a regular customer, Jim got visits from London guitar players like Pete Townsend and Eric Clapton. Eric and Pete became the first two players to develop Marshall’s hugely successful line of amps.

To start meeting the demands of the growing music scene in London Jim Marshall started to import Fender amplifiers. A popular model was the Fender Bassman, an amp used by both bass and guitar players at the time.

After selling the very expensive Fender amps for some time, Jim thought he could rip the design and sell his own models at a much lower price.

The first creation Marshall made was dubbed the JTM45.

Essentially an attempt to create a cheaper Fender Bassman. Jim put the amp in a head and used a 4 by 12″ closed back cabinet instead of Fenders 4 by 10″ combo approach.

Eric Clapton further developed the JTM45 model by asking Jim to build him a Combo version using 2 12″ speakers in an open cab combo with a built-in tremolo.

This is the amp used on the John Mayhall & The Bluesbreakers Beano album.

During this time, Jim decided to source cheaper valves and the KT66 was to be put into all Marshall amps instead of 6L6’s.

This changed the sound of the amp to produce more distortion and volume. All this improved loudness and Marshall managed to win most of London’s guitar players over.

Jim was always friendly with London musicians and kept on developing his line of amps for them.

Pete Townsend was obsessed with his guitar being louder than everyone else so he asked if Jim could design him a 200W amp, with 8 12″ speakers. And while he was at it, a bass version for his bandmate John Entwistle as well.

Jim got to work and produced a monster amp that was so huge Townsend couldn’t tour with it.

After some discussions they decided to cut the 8 12″ speaker cab in half, consequentially the concept of the full stack was born. A 100W amp drives two 4 by 12″ closed cabs. The top cab had the top half sloped as well.

Ironically, The Who couldn’t afford to lug the full stacks across the pond to America so they ended up only using Marshall for a few more years before they moved to Sound City amps.

To further detract from Pete’s and Johns input, Jimi Hendrix and Eric Clapton adopted the new full stack creations while The Who were away. Since they were the first to be seen with them, they are usually credited as the pioneers.

After a recommendation of Pete Townsend, Jimi set up a deal with Jim where Marshall amps would be provided for him worldwide. Hendrix would, in turn, pay in full for every amp. In hindsight, this must have been the best deal Jim Marshall did in his life.

The amp of choice for Hendrix was the 100W full stacks that can these days be bought as the Jimi Amp, or the Super 100JH.

With 3 ECC83 preamp valves and 4 KT66 and the full 2 by 4 12″ speaker cab setup, this is a killer amp. According to Jimi himself, nothing can beat it.

Following Hendrix, we can see how every guitarist who wanted loud, wanted Marshall. Yngwie Malmsteen, Rick Parfitt (Status Quo), Gary Moore, Malcolm Young, Kerry King and Jeff Hannerman (Slayer) and Slash are all guilty of building their own Marshall wall.

Due to the ridiculous nature of being as loud as an actual wall of amps, most of these cabs were dummies. They do however make an impressive stage prop. 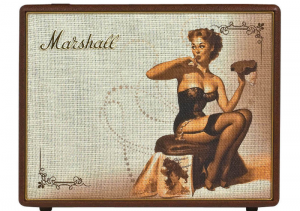 You would have to walk far to meet a pro guitarist that never played through a Marshall amp, their legacy is massive in the guitar world.

Jim might have started out ripping the Fender Bassman off, but he’s been creating music history ever since.

In the true tradition of the Marshall way, they keep developing amps with guitar players. Kerry King of Slayer has built a noise gate and his EQ pedal into a JCM800 head.

In the YouTube video, Kerry is really excited about his new model the 2203KK Kerry King signature JCM800 Head. As he says “It means a hell of a lot more to me than winning a Grammy”.

Notice how the tribal pattern on the amp is the same as on Kerry himself. Certainly, no detail overlooked in this build!