A pentatonic secret from Scott Henderson!

If you are a keen Spy Tunes member you know that I swear by knowing the basics first, avoiding tricks is my philosophy. In fact, it is Scott’s as well, he reinforces this time and time again in other lessons.

Since learning guitar is such a big task, many guitar players get sidetracked before they actually learned the basics. The trick I’m about to discuss today is one of those tricks that could lead to that.

So now that I’ve put the warning out there, let’s look at a Minor Pentatonic trick that you can use, just remember, it is a trick. Or as M.I put it, a pentatonic secret.

At 1:00 the lesson starts and Scott talks about the pentatonic shape. This is an Em shape if you follow the rules of the Guitar Conspiracy and Chordacus.

As Scott explains, you can play it at fret 7 over a Bm7 groove, but you can also play from fret 9 and fret 2.

So let’s look at why this works and possibly more importantly when it won’t work.

Here’s what B Dorian looks like in an Em shape.

Dorian, being the second mode is in Bm deriving from the A major scale, this is mentioned in the video.

It may look like an Em pentatonic shape starting two frets too high, but that is only the visual shortcut, you are still playing in Bm. Now without a m3rd but with a 6, very Dorian.

Can you see the Em shaped pentatonic scale in the pictured B Dorian, Dm shape?

Can you see the F#m pentatonic in the pictured B Dorian, Am shape below?

Guitar Conspiracy readers know the importance of understanding the number of each chord. When you know this you can apply all modes with ease.

Using Scott’s theory over chord VI, we no longer can move a tone up and a 4th down. Should Bm have been chord VI for example then the same concept only works if you play the same shape a 4th up and a 5th up.

If Bm was chord III you would have to go a 4th up and a tone down.

Use the SWS to see this. Look for Bm as chord II, III and VI.

It works in major too!

Of course, the same phenomenon is possible to apply over the three major chords.

Over chord I, let’s say we are in the key of A, you could play the same shape at fret 5, 10 and 12. This would pick out various parts of the major scale.

If you want to do this with a Lydian sound you need to go up a tone or down a 4th.

For a Mixolydian sound, move down a tone or up a 5th.

Of course, you don’t have to use the same shape all the time. Looking at the pictured A Ionian, E shape below, can you see the Minor Pentatonic shapes of Gm, Am, and Dm?

Can you see the major pentatonic shapes of E, A and C?

This was a quick way to get modal sounds, all you do is move the same shape to a new fret.

If you find one of these tricks that you really feel works, like move up a tone over chord II for example, then try to fit this into solos.

You could take a lick and simply move it up two frets, then back down again whenever over a II chord.

The problem with tricks, secrets, and shortcuts are that it makes you memorize a bunch of stuff that is so specialist that if you don’t know your basics you are looking at muscle memory, trial and error.

However, if you do know your modes and pentatonic scales, this is a brilliant trick for milking one phrase. Just move it around!

I strongly believe that all serious guitar tutors from this era, Frank Gambale, Scott Henderson, and Paul Gilbert would all agree that to know your basics combined with tricks like this and a repertoire is the best way to master the guitar. 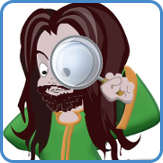